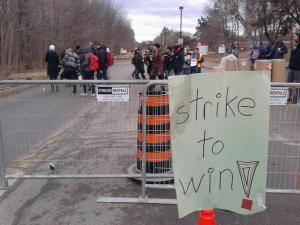 Picket sign with slogan “Strike To Win!” (Photo by author)

As many of you may know, CUPE 3903, the union representing Teaching Assistants, Graduate Assistants, and Contract Faculty at York University (a union of which I am a member) recently concluded a successful strike. Our month-long strike ran from March 3rd until March 30th, and ended with the ratification of a contract that met virtually all of our major demands.

The strike was a tense and emotional event, and we all went through our share of ups and downs. With the strike over, I wanted to take advantage of this opportunity to reflect on what I feel were important moments in the months leading up to and during the strike. In particular, I want to discuss some of the divisions that have been present in 3903, and that I believe played an important role in shaping events surrounding the strike.

Although some of the disagreements and debates that have occurred between members on both sides of this divide over the past year have been personal and unproductive, the nature of these divisions are not personal. Rather, what we have are two fundamentally differing visions of how the union should function. On one hand, we have active components of the rank-and-file that believe in, and advocate for, a union that operates from the bottom-up and is driven by its membership. On the other hand, there are those who last year ran in the union’s elections on a slate called “Union Renewal,” and that have served on the executive during the past year, that seem to favour a more top-down approach to union organizing in which the leadership exists not to follow directions from the membership, but to direct them instead.

I want to talk a bit about these competing divisions and some of the ways in which the top-down approach of the slate members of the executive and their supporters (many of which are currently running for the Better Union slate) has manifested itself over the past year. I’ll do this by referring to three events that I feel best reflect their mode of organizing. The first are events that occurred during a December 2014 meeting held to decide on a timeline on the strike vote and potential strike, a meeting that was stacked by the executive in order to ensure that the vote went their way. I will then discuss how the slate-dominated executive’s mode of organizing failed during the strike, allowing membership-driven unionism to prevail and win the strike. Much more could be written about the internal politics of CUPE 3903, but I will leave the rest to be written by someone with a lot more time on their hands.

This analysis is largely based on my own experiences. My hope is that it will make a worthwhile contribution to the post-strike analysis of the events leading up to and during the strike of March 2015. Contributions and/or disagreements are more than welcome!